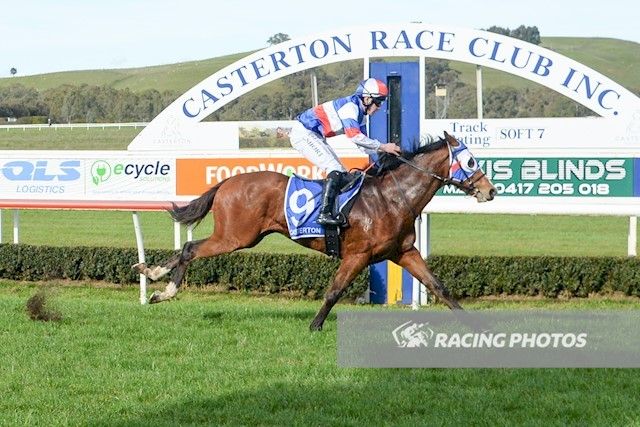 Sunday racing seen us head to Casterton where Elvison put on a dashing display to win the Moredun Hill Steeplechase with Aaron Kuru in the saddle.
Weightman was able to break his maiden status with a great front running ride by stable jockey Ronan Short.

It was great to see Weightman (pictured) win the 2000m maiden with a bit of a margin to spare on his rivals. He has been unlucky in some of his previous starts, so to get the win on the board for his connections was a pleasing result. With a couple of hurdle trials in between his flat races, he certainly had a fitness edge on his rivals. With the jumping season coming to a close, we will look to maybe pick off a maiden hurdle with Weightman to hopefully set him up for next years jumping season.

Elvison again showed his love for the Casterton live hedges putting on a faultless display of jumping. Leading by as much as 10 lengths at one point, Elvison gave nothing a chance to beat him. Adding in that he carried 74kg his victory was dynamite. That is Elvison’s 4th win from six starts at the track and he is poetry in motion to watch around the course. Now that he is creeping up in the weight scale, we may look to tackle the Crisp Steeplechase at Sandown as we near the end of the jumps season. Elvison has had a terrific campaign winning 3 of his 5 jumps starts and earning over $150k in prize-money.

Congratulations to both groups of winning connections.