Three day carnival to Morphettville – it was a successful one 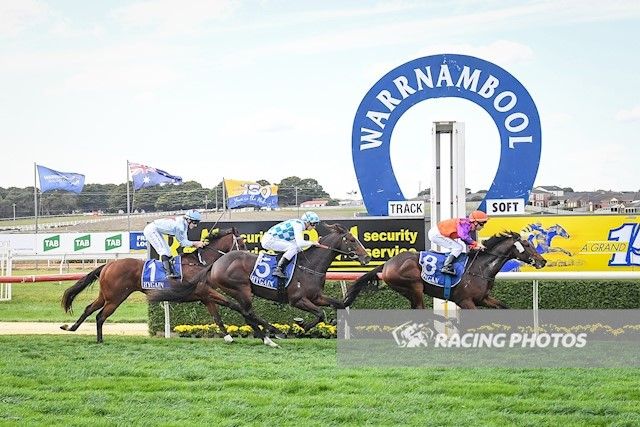 It is always a busy time of year for Wilde Racing when the first week of May rolls around as the stable saddles up numerous runners over the famous three day Warrnambool carnival.
This year was no different, with 24 runners over the three days, bringing home five winners and six placings.

Tuesday was our most successful day with the five winners which included three jumping races and a quinella in two of those events. As I Please and Mio Capo (pictured) were successful on the flat.
Honest galloper Count Zero showed he is just as talented over the jumps as he is on the flat, with a tough win in the maiden hurdle.
Tolemac put on a dashing display of jumping only to be run down late by stable mate Rider In The Snow.
Britannicus and Vanguard were brilliant in the Brierly steeplechase providing the quinella for the stable in the jumping feature for the day.

It was a great result for the stable with four of the five winners coming from other stables and looked to rejuvenate their careers over the jumps. Or like Mio Capo, had dietary problems where the paddock life has seems to agree with him and he won most impressive on debut. As I Please, Symon purchased as a weanling for as little as $9000 and he has developed into a handy sprinter, starting his career with us at Wilde Racing.

It certainly was a memorable week for the stable, to train five winners was a first but to do it at home at our main carnival for the year was something special.

Saturday seen group racing head to South Australia. We had Mask Up lining up in a BM64 1200m as well as Sirileo Miss in the Group 2, Queen Of The South.
Mask Up was first up from a spell and was given a great ride by Craig Williams. He was too strong in the run to the post and remains undefeated from his two career starts to date.

Congratulations to all our winning connections throughout last week.