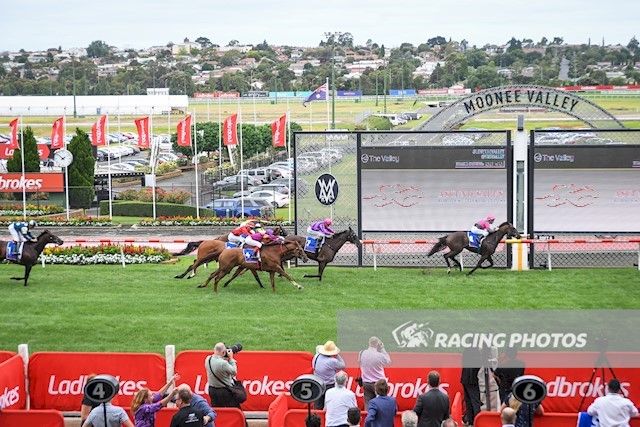 New Zealand import Zoltan (pictured) bought up his first Australian victory at Moonee Valley on Saturday. He was given a 10 out 10 ride by Linda Meech, who saved every inch of ground before going on to win by 2 lengths.
Zoltan arrived in great order from New Zealand and it didn’t take him long to settle into the Australian way of training. Having three starts now and all encouraging performances, we look forward to seeing what Zoltan can achieve going forward. We thank the owners for selecting Wilde Racing to train their horse.

Emerging stayer French Moon bounced back into the winners stall at Donald on Sunday. He has had a frustrating campaign since returning as a 4yo after a promising 3yo career.
After a few luckless runs in city grade, we dropped French Moon back in class and trip and it seemed to be the key to getting him back in the winners stall. The plan was to get cover and have him chase something down but with the slow tempo, Linda Meech used her initiative, took him to the lead and rated him well out in front. It was great to see him dig deep when the second horse challenged him at the 100m mark.
He still has plenty to learn and hopefully as he matures we can see the best of him in his later 4yo career.

Congratulations to both groups of winning connections.