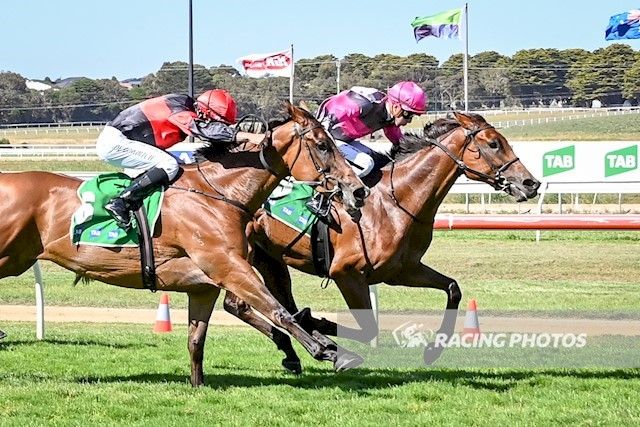 It was another successful day at our home track on Sunday with the running of the Koroit Cup.
We saddled up a small team of runners for the afternoon, bringing home the quinella in the cup and winning the last race on the program.

Glassey Miss (pictured) broke through for a much deserved feature win in the Koroit Cup. She is such an honest performer and rarely runs a bad race.
With many of her owners on course to cheer her home, she was given the perfect ride by Harry Coffey. Glassey Miss was a little suspect at the 1700m for the first time, Harry nursed her for as long as he could. She gave a good kick once in the straight and quickly ran down the initial leader before holding off the stablemate Nordic Symphony in the shadows of the post.
Raced by many of Symon’s close friends, Glassey Miss has proven to be a bargain buy for her large group of owners. Purchased for only $18,000 as a yearling, she has now won six races and over $150k in prize-money.

Home bred Thunder Point won the last race on the card under Linda Meech. He was able to get away with a leisurely tempo out in front and gave a good kick on the turn. Thunder Point cruised away to win by 2.25 lengths, showing similar traits to his older brother, Inn Keeper. Many of the owners race both horses. Traditionally of the family, they have taken time to mature and Thunder Point is no different. A lightly raced 4yo where the penny is just starting to drop, he has plenty of upside going forward.