Treble at Hamilton as Symon celebrates his 40th 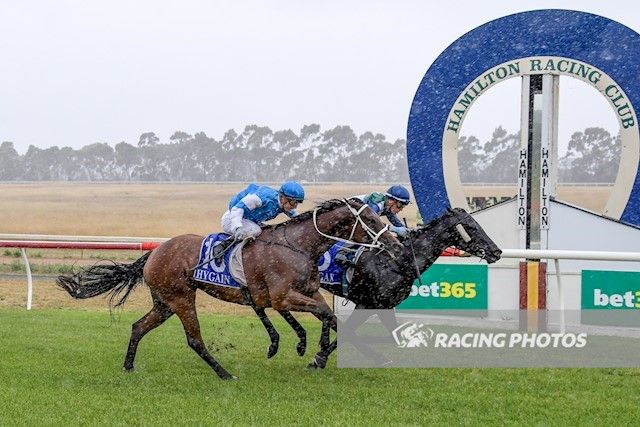 It was a successful day at Hamilton last Friday with the team bringing home a treble in what was more like winters racing than summer racing. What a birthday present for Symon – who turned 40 on the same day. As the rain poured down and the track deteriorated, it didn’t dampen the success Wilde Racing were having on the track.

Miss Cavendish was the first leg of our winning treble. Having her first start for Wilde Racing for well known Hamilton local Peter Young, it was great to see Miss Cavendish break her maiden status. We knew the ability was there but she had a tendency to miss the start and that would be her out of contention. With some barrier practice and a change of environment, we couldn’t have had a better result for Peter on his home track. Miss Cavendish was tough in the conditions as it looked as though she was headed in the straight but to her credit she fought back and got the win on the board.

Manhattan Gangster and Melissa Julius got the win in the staying event. It was a terrific ride by Melissa, cutting the corner and saving all the ground up along the rails.
It was very pleasing to see Manhattan Gangster tough it out in the wintry conditions with the view to him going jumping this campaign. Too get a win on the board so early in his preparation was very pleasing for his connections.

Obi was making the step up in grade from a maiden win at Penshurst to 58 grade at Hamilton and the improvement he had made was very impressive. Josh Cartwright gave him a lovely run in transit. When the gap appeared in the run home Obi sprinted clear and then win was very encouraging in the end. We also provided the quinella in this race with Crystal Pistol running a brave second first start back after a long lay off.