Four Years in a row for the owners of Ginny Ann 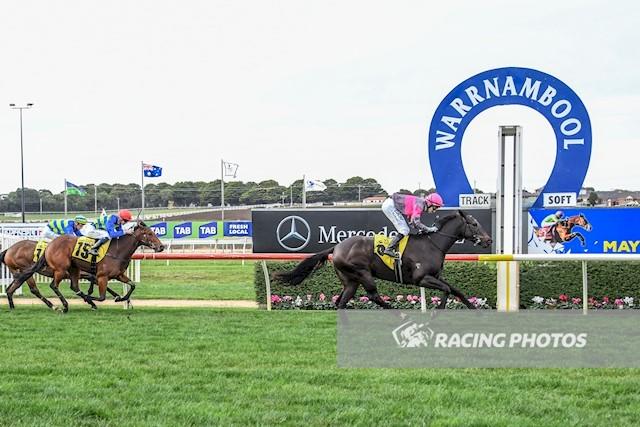 This lucky ownership group have had a runner in the 2yo Colts and Geldings division over the May Carnival for the past 3yrs.
Bringing home first place on all occasions. This year they turned their hand to the fillies division and again they took out the prize with their filly Ginny Ann.

For Ginny Ann, she didn’t know the high expectations we had of her.
After racing her half brother Hecta, Ginny Ann holds a special place in their hearts.

Ginny Ann drew a wide barrier, she jumped, settled back and although wide she had cover and was always kept out of trouble.
Rounding the home turn, Andrew Mallyon looked as though he had a lap full of horse.
When he asked her for an effort, Ginny Ann sprouted wings and put pay to her rivals rather quickly.
She won by an impressive 2.5 lengths, going away from the rest of the field on the line.

The roar from the owners could have lifted the roof off the grandstand.
The elation and joy they got from this win, was still as high for them as it was in 2016 with Rata Tat Tat, the first horse they had take 2yo glory.