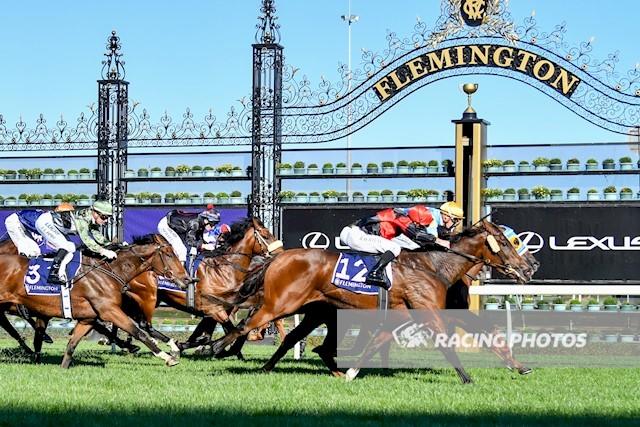 We saddled up Nordic Symphony in the Peter Armytage handicap. Nordic Symphony is owned by Nick Armytage along with his father Chas and a few close mates.
Nick is the grandson of Peter, and although it wasn’t Symon’s choice of races to run the Filly in, Nick wanted to have a runner in a race named in honour of his grandfather.

Nordic Symphony races in the colours of black with a red band, Peter originally raced his horses in these colours. Peter handed the colours down to Chas which have now been passed down to Nick. The result was a fairy-tale finish….

Nordic Symphony was a $30 long shot. She wasn’t given a chance by the professionals and the betting certainly reflected that.
Beau Mertens was in the saddle, she stepped awkwardly from the barriers and settled towards the end of the field.
The race was run at a solid tempo, she relaxed beautifully out the back. She was the widest runner on the turn and tracked up nicely behind one of her rivals.
Beau peeled off their backs and at the clock tower we could see the Filly moving into the race. She looked a live chance…

A lunge right one the line made the result very close…had she just missed or did she get the bob in?
The race caller had called Orcein the winner but when the slow vision was shown, our filly had made it awfully close.
The photo finish was shown and after a long break with no result, the judge officially declared a dead-heat.

Racing really does deliver those fairy-tale moments and for the connections of Nordic Symphony there couldn’t have been a better story.