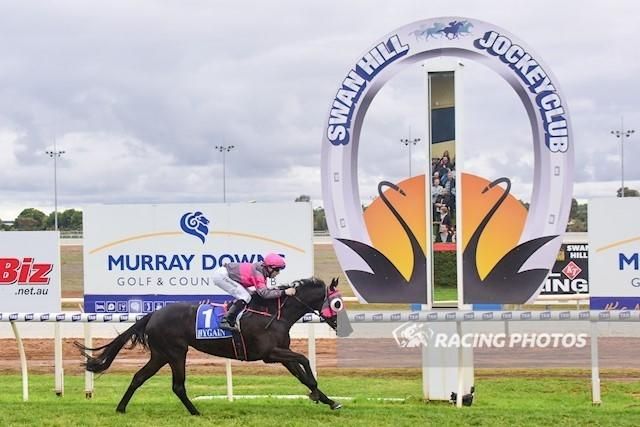 The long weekend seen Wilde Racing make the trek to the Swan Hill three day carnival with a handful of runners.

Friday was the running of the feature sprint race the Golden Topaz.
We saddled up the promising Inn Keeper, with Linda Meech on board.
Persistent rain fall the night before and during the day seen the track deteriorate into the heavy range – a real bonus for Inn Keeper.
The gates flew back, and very uncharacteristically of Inn Keeper he was slow to begin. Linda made him work hard to take up the lead & make up the ground he lost early.
Inn Keeper relaxed beautifully when asked & upon straightening we thought we would see how tough Inn Keeper really was.
He was left a sitting shot late after working hard and giving a good kick on the bend. Just when he looked to be run down from the horse out wide on the track, Inn Keeper dug deep to hold off the Darren Weir trained First Among Equals.

Saturday seen Florida Pearl (pictured) start favourite in the Quambatook Cup.
With the 3kg claim from young apprentice Lewis German, she came in well on the weight scale.
The heavy conditions were in Florida Pearl’s favour and she plowed through the going.
Lewis gave her a beautiful ride just outside the leader & on the turn Florida Pearl travelled well into the straight.
She gave a great kick & held off her rivals by 8 lengths.

Well done to everybody involved in the feature wins over the Swan Hill Carnival.