Tolemac and Bazini tough it out at Hamilton 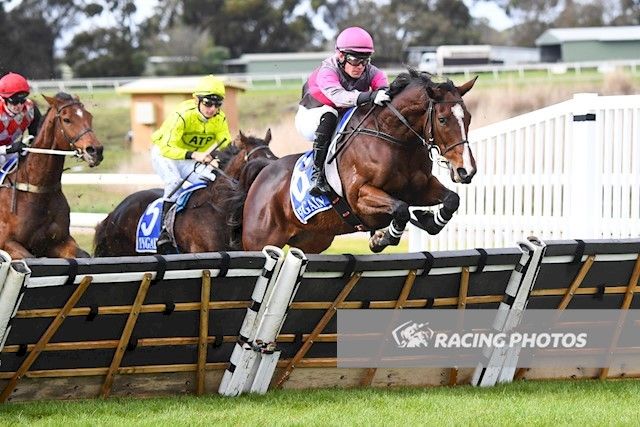 Tuesday racing headed to Hamilton for a bumper card of ten races. Six of those being jumps and the remaining four for the flat.

Tolemac (pictured) got a much deserved win in the maiden hurdle. After going down narrowly at his previous two starts, Tolemac had to show a tonne of fight to get the win.
It was very tough condition but the 6yo son of Camelot showed his staying prowess and his liking for the heavy condition to secure his maiden hurdle victory.
He was given a great ride by stable jockey Ronan Short. Tolemac has always shown a good amount of ability over the hurdles and it surprised the team it has taken him 4 starts to break the maiden.
Now the maiden is out of the way, the team are confident there is a better hurdle race in Tolemac, whether it is this jumping season or next.

Slow maturing stayer Bazini won the last race on the card. He was a beaten horse at the 200m mark but got off the canvas for a tough win. The lightly raced 4yo has always shown that the further the better would be the key to us seeing the best of him. Now that he has matured, we are starting to see the furnished product on the racecourse. Mixing his training with jumping seems to have sparked up Bazini putting in two solid performances this time around. Although he shows to be quiet capable of jumping, Bazini has bigger things lined up on the flat before heading down the jumps path. A Jericho Cup towards the end of the year certainly looks like and ideal target for him.

Congratulations to the winning connections of Tolemac and Bazini.