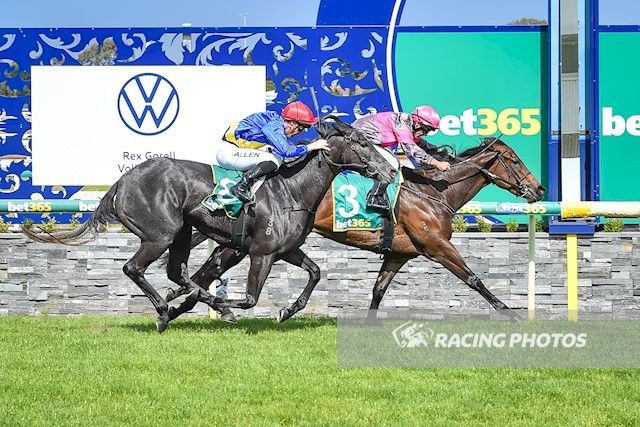 Destiny Diamond scored an impressive maiden win at Geelong yesterday.
After finishing second on debut at Casterton as a 2yo, Destiny Diamond was put away and given time to grow and mature. Yesterday she showed she might be above average.
For a 3yo filly having her second start she is very much a professional. She doesn’t turn a hair on race day, relaxed in the stalls, mounting yard and ever throughout the run.
Joe Bowditch was full of praise for the daughter of Raphael’s Cat after the race, saying when she hit the front she switched off and didn’t really know how to go on with the win. He felt if the second horse had of got close enough, he had enough to be able to raise a challenge and still go on to win.

It was a great result for breeder Gary O’Meara who purchased the mare, Diamond Darling who was in foal to Raphael’s Cat and Destiny Diamond is the result. Gary leases the filly to close friends and Wilde Racing.

Congratulations to the winning connections. They look to have a handy filly on their hands.