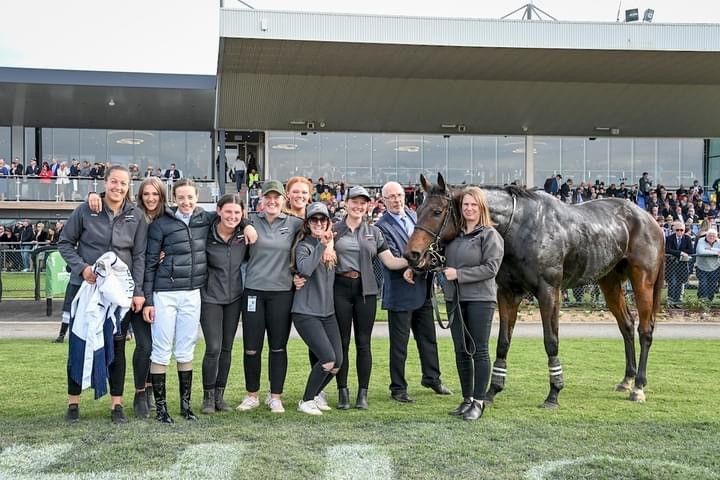 The 2021 May racing carnival will go down as one of the most memorable for Wilde Racing.
From 26 starters we secured four winners and six minor placings over the three days. Two of those winners were features being the Wangoom Handicap on Wednesday followed by the Grand Annual on Thursday.

We kicked off Tuesday with three maiden hurdlers, all completing the course safely and looking as though they have a future at the jumping caper.
Georgethefifth represented us in the Brierly steeplechase, he made a few mistakes and was a good eye catching run for a potential tilt at the Grand Annual on Thursday.
Our last runner for the day was Dinga and he was able to get the win on the board, after a smart front running ride by Damien Thornton. In what looked to be a leaders track and you need to be close to the rails, Damien pushed forward from the wide barrier. He was able to get a couple of cheap sectionals once he crossed to lead and Dinga was able to kick into the straight with a good lead to hold off his rivals.
It was great to get the win for long time clients, Whitehead and Blackwell families who have supported the stable for many years.

Day two of the carnival seen the running of the listed Wangoom handicap and we saddled up Inn Keeper and Just Hifalutin in the race. Inn Keeper bred by the Wilde family and won at the carnival three years ago was coming off a last start victory on Terang Cup day. Just Hifalutin was having her second run for the stable after a failed stint at stud. Inn Keeper drew well in barrier two and got the run of the race for jockey Dean Holland. He said from the 600m the horse travelled so well, he just needed an outing and he new he would be in with a chance. The gap appeared at the top of the straight and Inn Keeper showed a terrific turn of foot to get the victory by a length. It was a great thrill winning the race with this horse, as we always new he had the ability to do so. He ran third in the race last year and was unlucky the year earlier.
Predominately raced by family and a close mates of Symon’s it was really pleasing to get the featured win for a locally based ownership group.

Thursday is Grand Annual and Warrnambool Cup Day and what a day it was!!
Georgethefifth was on the back up in the Annual after his run in the Brierly on Tuesday and Gold Medals was back for his 4th run in the race. Gold Medals an 11yo having his first run over the steeples this year was back to match it with his old sparring partner Zed Em, the pair of them having a great rivalry in the race over the past four years. As always, the race is a great spectacle. The crowds lined the hill to get the best view and the stands were full as all eyes were on Gold Medals and Zed Em doing battle again. It was a great race, Zed Em had his usual pace makers roll and Clayton Douglas had Gold Medals in a lovely rhythm out the back, saving ground at every turn that he could. Coming into steeple lane with 600m to go, it was game on, the local legend vs the tough kiwi. The pair jumped the last in unison, and the crowd erupted.
Gold Medals kicked clear with about 200m, Zed Em tried tenaciously to fight back but it was our local legend that was able to hold on and win his second Grand Annual.
It was an emotional time for everyone involved, too have the staff group clapping him back to scale and Clayton giving Gold Medals the lap of honour down the straight, this Grand Annual goes down as one of the most memorable. Georgethefifth was gallant in defeat to run in third. To run into those two champions we were just as proud of Georgethefifth’s effort as we were Gold Medals.

Ammoudi Bay was able to win the race after the Grand Annual to cap off a carnival to remember. A horse that looked as though he had lost his way a little bit, has bounced back to form with two wins from his past two starts.

A big thank-you to our hard working staff who we couldn’t manage without.
Congratulations to all our connections who had winners over the carnival.