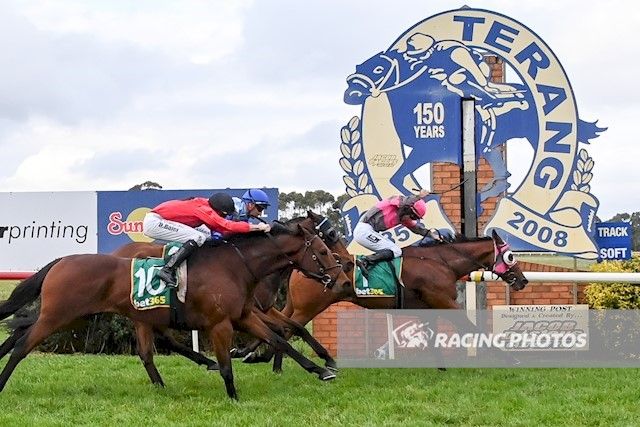 Inn Keeper (pictured) turned back the clock with a gutsy win at Terang on Sunday. It was great to see the old horse bounce back into the winners circle and show that he still wants to be a racehorse.
He was given a lovely ride by Luke Williams, he never left the fence and he showed great patience waiting for a gap to appear. When the run opened, Inn Keeper had a great turn of foot to secure victory. He has being a fun horse for the large group of connections and they now head to the Wangoom with a horse in form.

Ammoudi Bay continued his love affair with the Terang track, bringing up win number three from as many starts at the track on Sunday, making it a double for the team.
He is a horse that has his quirks and it didn’t look an easy ride for Joe Bowditch. Ammoudi Bay has the tendency to over race if the tempo isn’t solid and hangs in when the riders are asking him to make a run but he was able to overcome those problems and win by the smallest of margins. With that win on the board, his rating going up and placed right we hope to be able to get the city win in the near future as he always has looked capable of picking up a better class of race.

Congratulations to both groups of winnings connections on the day.