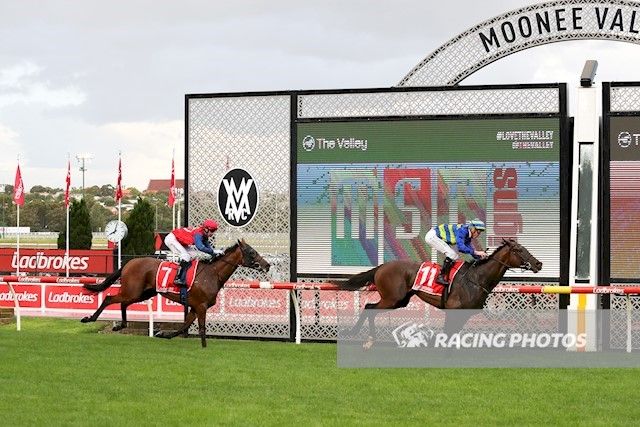 The quick back up didn’t worry Beachgoer who was a winner at Moonee Valley on Friday night over the 3000m. Stable mate Field Of Lights ran second to make it a quinella for the team.
Ridden by Beau Mertens, Beachgoer was battling to keep in touch with the rest of the field first time past the post. He is a quirky horse that has a think about his job at hand.
After riding Beachgoer at his previous start, Beau had learnt a bit about the horse and gave him a lovely ride. He allowed him to settle out the back and get into a nice rhythm. He is a horse that needs to get going early and build momentum so from the 1000m Beau steadily made his run around the outside of the field. Coming into the corner Beachgoer was full of running and went on to win by two lengths.

It was great to get the victory over the staying trip. He looks like a horse that will relish the 4600m of the Jericho Cup towards the end of the year. Winning a 3000m race gives you points to be eligible to run in that race. Beachgoer seems to thrive off the longer trips and even further than the 3000m wouldn’t seem to worry him. He looks to be a promising stayer if he puts his best foot forward on race-day.