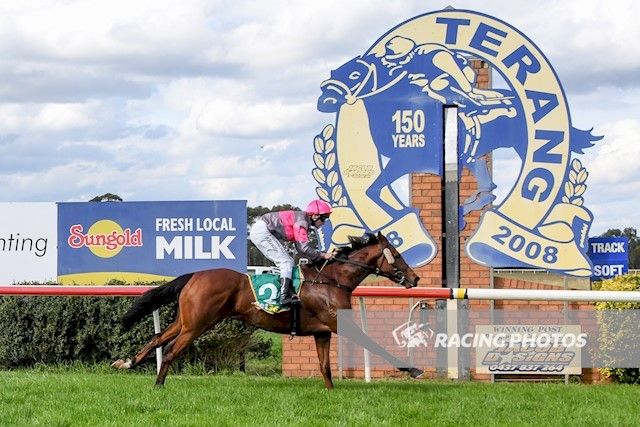 It was a busy weekend for Wilde Racing starting with three runners at Kyneton on Friday. Now and Forever found herself back in the winners stall after a daring front ride by Clayton Douglas.
From the jump Clayton was persistent for the lead heading into the first turn. She was able to get a small breather up the back straight before Clayton started increasing the tempo again. She kicked clear at the 400m mark and pinched a break on the rest of the field rounding the home turn. She was extremely tough in the run home, when the challengers came she fought hard. It was great to see her show such fight after running the field along at a fairly solid tempo for most of the race. Now and Forever is a mare that seems to appreciate firmer going and rolling along at her own speed out in front and she got both of these factors on Friday to be able to secure her second win for the stable.

We ventured to two venues on Saturday (Caulfield and Ararat) with a runner at each and whilst we didn’t get a winner, Ammoudi Bay was an eye catching run at Caulfield. His racing pattern doesn’t make for any easy watch but he was flashing home late and is knocking on the door for another win in the near future.

Terang on Sunday, we saddled up four runners for Cup Day and Bill also had Duecourse going around.
It was Symon’s most recent tried horse purchase, Paddy Mac(pictured), that was in the winners stall. A lightly raced 4yo gelding by Raise The Flag, he was a dominate winner in the 1400m maiden. Bred to get over twice the distance, Paddy Mac careered away to win by 5.5 lengths under the guidance of Brad Rawiller. He looks to be a promising horse going forward with his time being slightly quicker than the BM70 1400m race on the same day.