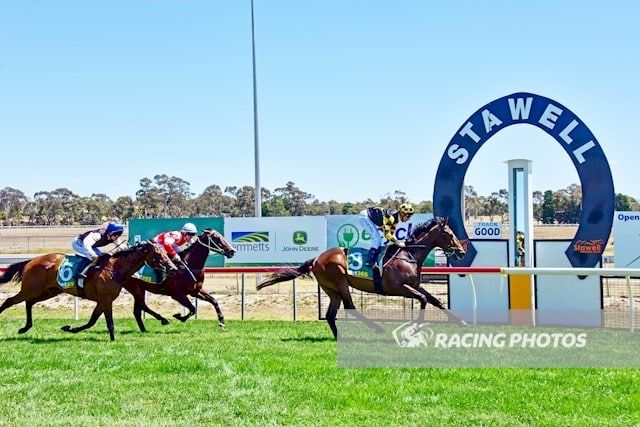 Wilde Racing ventured to Stawell on Saturday and Werribee on Sunday bringing home winners at both venues.
At Stawell we had Freestyler break his maiden status after running honestly at his previous starts without much luck. He did a terrific job under Lorensini, who made all his luck by taking off early and pinching a break at the top of the straight to win by 1.75 lengths.
It was great to finally get the maiden win out of the way.

Toff Love (pictured) brought up a winning double at Stawell. For new comers to Wilde Racing, we couldn’t have asked for a better way to start off our connection with Grand Syndication’s.
Toff Love has had his share of niggles but the beach environment and relaxed country stable life seems to have clicked with this horse and he won on Saturday as though he can continue to progress through the grades as long as he stays sound.

Sunday we were at Werribee with three runners on Werribee cup day. Strategic Force was able to back up his good performance at Warrnambool the week prior with an impressive victory.
Although he was a little worked up pre race, he jumped and settled at the back of the field. While still last on the turn, he wasn’t far off the lead. When the gap came, Strategic Force showed a great turn of foot and accelerated through to win with something in hand. It was great to get a win on the board so early in his campaign and it looks as though Strategic Force could go onto bigger and better things, especially this time of year with so much summer racing around.

Congratulations to all our winning owners on the weekend.