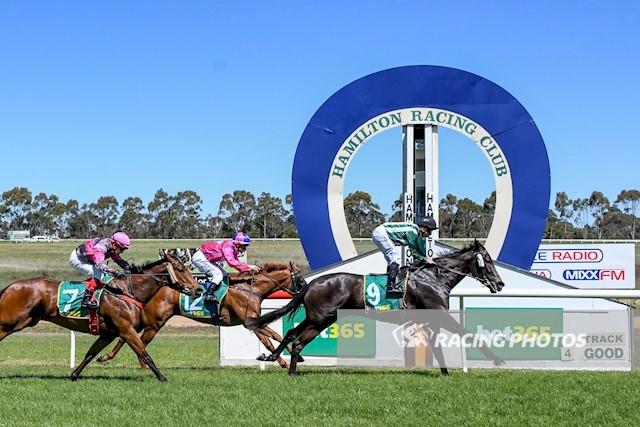 The team headed to Hamilton on Tuesday with seven runners and it was a successful day.
From the seven runners we brought home two winners and four placings.

The first of our winners was Pristine Image who was having his first start back from a break.
He had one start as a 2yo at Donald and his run was very encouraging so it was great to see him come back just as good this preparation.
Pristine Image jumped well, travelled just behind the speed before running away in what looked a soft victory.

Heavenly Barb (pictured) brought up the second winner for the day.
The owners purchased her as a breeding prospect after injury halted her career early days.
She was doing so well in the paddock they decided to bring her back into work and their patience has been rewarded.
It has been a great effort by the team at home to manage Heavenly Barb, she is big mare and it isn’t surprising she has her little niggles.
Heavenly Barb made her debut for the stable on Hamilton Cup day 10 days earlier after having 12 months off and she looked the winner only to be nabbed right on the winning post.
She made amends for the defeat on Cup Day and won impressively at Hamilton on Tuesday. Dean Holland reported her win was soft in the end and he thinks Heavenly Barb can definitely progress through her grades.

Congratulations to both sets of winning connections.