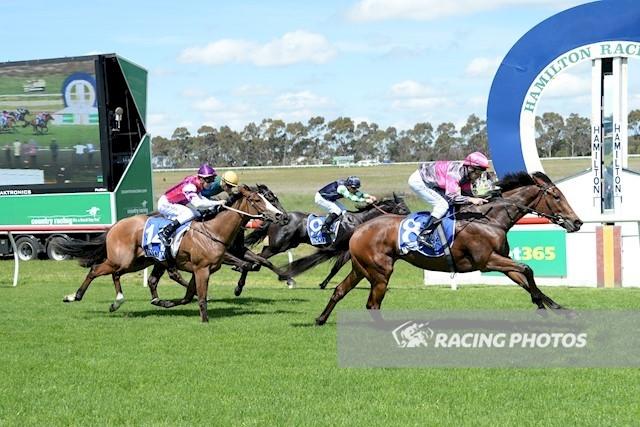 It was a busy weekends racing for the stable, where we travelled to Hamilton and Murtoa for their cup days. The stable was successful at both venues bringing up three winners for the weekend.

Glassey Miss (pictured) won impressively at Hamilton on debut with Jason Maskiell in the saddle.
A bargain buy from the 2017 Vobis Gold Sales, Glassey Miss looks like she has a bright future ahead.
She jumped well, travelled behind the speed and looked as though she was going to run a great second before hitting her straps over the final 200m and was running away from her rivals in the end. Although she did the job well on Saturday, we think she is only going to be better next preparation.

Valley Of Hearts rewarded his patient owners with a great win on debut at Murtoa on Sunday.
He is the little professional and did a good job too win like he did from the awkward barrier.
It was great too see many of his owners at Murtoa to enjoy the win and they look as though they will have some fun in the future with Valley Of Hearts.

The last of our three winners was Foxy’s Star who also won at Murtoa.
We thought he was very tough to get the win on the board. He jumped well and did a fair bit of work to cross to the fence and hold a comfortable lead.
Dean Yendall was able to give Foxy’s Star a little breather before kicking off the home turn and putting a gap on the rest of the field.
Foxy’s Star was tough in the finish, he was there to be run down but was too good for his rivals in the end.

Congratulations to the large group of winning connections in Glassey Miss, Valley Of Hearts and Foxy’s Star.