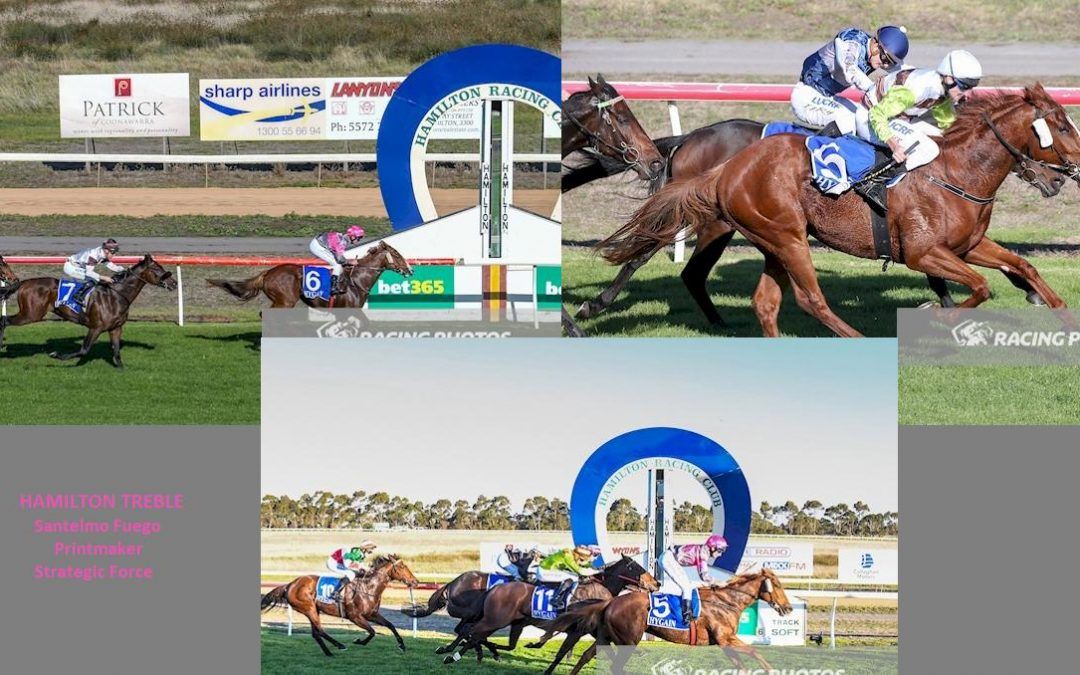 It was a great day out for the stable at Hamilton on Thursday bringing home three winners, all of which had hard luck stories over the May Carnival.

The first leg of the treble was Santelmo Fuego. He had one start as a colt as an early 3yo before he was gelded and sent to the spelling paddock.
His first up run over the May Carnival was full of merit and it was a credit to the horse to take the gap in his win today, after being struck by the whip of another rider when he run a credible 4th first up from a spell. Santelmo Fuego won impressively and it looks as though he will only get better with racing as he is still learning his craft.

Printmaker brought up win number two for the afternoon. He too had a tough run at May and although beaten a long way we weren’t to deterred by his run after winning at Warracknabeal the start prior. Jumping from a wide barrier, Printmaker ended up having the ideal run. The horses drawn inside him didn’t want to take up the early lead, so Brad Rawiller was able to cross the field going out of the straight the first time and ended up in a lovely position. Printmaker showed a lot of fight down the straight with the second horse not wanting to give in but our horse got his nose down, right on the line for a tough win.

Strategic Force won the last race on the 10 race program and brought up win number three for the afternoon.
Again, another runner who had a hard luck story over the May Carnival and backed that up with an encouraging win.
Strategic Force was a long way back and was tracking into the race nicely behind another runner. He was the widest at the top of the straight but let down strongly to win by 3/4’s of a length in the end. For a horse in his first racing preparation he certainly has done a good job and looks to have a bright future ahead.